Social media is a phenomenon that has captured the attention of the world.  To some, the ease of connection means staying close to loved ones no matter the distance.  To others it is a means of business and commerce.  But in some cases it can be the means to topple an unjust government and try to build a new one.  This was the case in Egypt in January 2011.

“What was very special about that day was the amazing turnout,” Mosa’ab Elshamy, Egyptian student, said about the demonstrations on January 25, 2011 in Tahrir Square.  “It wasn’t the first time for a protest to take place or an event to be created on Facebook, but what happened is there was a deep mobilizing that day; there were calls on the Internet; there was a hashtag on Twitter; people kept posting about it and telling one another.”

It all started with a Facebook event. “There was a Facebook group with called We Are All Khaled Said” Ragia Mostafa, American University at Cairo student journalist, said. “It was this Facebook event that created the event on Facebook for the revolution.”

“This young man [Khaled Said] who died in Alexandria in 2010.  He had filmed a video of these informants who were distributing drugs and he wanted to put the video up on YouTube and he was in an Internet cafe and they walked in, dragged him out, and literally beat him to death on the street,” Mostafa said.

“There was a Facebook group that was set up specifically for the revolution,” Laura El Gibaly, American University in Cairo student newspaper Editor-in-Chief, said.  “It was kind of a Facebook event and it became sort of a joke ‘RSVP to the revolution.’ Everybody underestimated the significance it was going to have.”

In the first days of the revolution social media was essential for turnout.

“All of a sudden protests that wouldn’t exceed 100 if it was really big, it turned out to be tens of thousands of people all marching together against torture and police brutality,” Elshamy said. 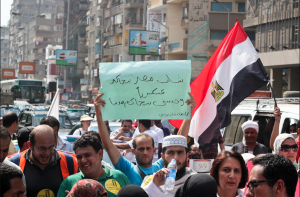 Things changed on January 28, 2011 when then President Mubarak shut down internet and phone services.  However, as the revolution unfolded the people of Egypt were already mobilized.

“Social media was an amazing tool,” May Koshaba, Business Development Specialist and Writer,  said. “People have their own platform to speak out publicly. It helped us to align and create one goal.”

“I feel that we shouldn’t over play that and make it seem that [social media] had a bigger role than it should actually be given,” Elshamy, said.  “The event was simply started on Facebook it wasn’t more than that. Protests have been going on in Egypt for over 30 years.”

Many people try to label this revolution as a social media protest but there is no way to know for sure.

“Social Media plays a role but there is no way to quantify it that anyone would take very seriously,” Andy Carvin, Social Media Strategist for National Public Radio, said.  “There are just too many other factors that are hard to measure.  For example, how many of these movements were strengthened through text messaging?  I’d say pretty much all of them had text messaging play a serious role but there is literally no way to ever measure that.”

There is no denying that social media had a role in the events that unfolded throughout the Middle East and North Africa in early 2011, but it was not access to sites like Twitter and Facebook that made the revolutions possible.  According to Aaron Bady, writer for the Technology Review, “it is access to each other, not access to media, that makes revolutions.”