Video and Article By: Holly Prendergast

Mohamed Bouazizi set himself on fire in the streets of Tunisia when police confiscated his fruit and vegetable cart after learning he didn’t have a permit for it.

Bouazizi’s suicide on Dec. 17, 2010 sparked a revolution of epic proportions that spread to countries throughout the Middle East and North Africa. His act of protest was a reaction to the long history of political corruption and oppression in Tunisia.

Almost immediately following the initial uprisings in Tunisia and the fall of its president Zine El Abidine Ben Ali, uprisings and protests quickly spread to Egypt.  Thousands of Egyptians gathered in Cairo’s Tahrir Square to protest against Hosni Mubarak and his 30-year regime on Jan. 25, 2011

“In January 2011, I can remember, it was very interesting,” Shady Ramadan, Project Officer for Catholic Relief Services (CRS) Egypt, said.  “I have never seen Egyptians that motivated and they were – it was very civilized.”

“Youth from different backgrounds and classes and parts of Cairo were all marching together calling for freedom, and I guess the rest was history,” Mosa’ab Elshamy, a student in Cairo, said.

On Jan. 25, police forces were very present in the streets of Cairo but it “didn’t become violent until after midnight,” Radaman said.

“The sit in [on Jan. 25] was dispersed at midnight by tear gas and rubber bullets, but then it was too late for the regime because people had found each other,” Elshamy said. 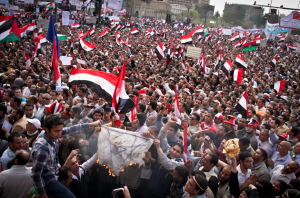 Once the people of Egypt saw the strength and power that they had, Egyptians from all parts of the country came to Tahrir Square to protest against Mubarak and his regime.

“People didn’t join again until January 28, which was like the real beginning of the revolution,” Elshamy said.  It was at this point “when millions, literally millions,” of people joined the revolution.

With the protests quickly growing, it was reported that just five days after the initial uprisings began in Egypt, the civilian death toll surged passed 100 on Jan. 30, according to the Huffington Post.1

As the number of casualties continued to climb in Egypt, the revolution began to spread even more throughout the Middle East and North Africa.

According to The Telegraph, beginning on Jan. 29, 2011 supporters of Yemen president, Ali Abdullah Saleh began to attack Yemenis who wanted to march to the Egyptian embassy in order to show their support for the protesters in Egypt. 2

With continued protests from both Egyptians and Yemenis, it was only a short time later that both regimes collapsed.

According to Al Jazeera, Hosni Mubarak stepped down from the presidency on Feb. 11, 2011, just 18 days after the initial protests in Tahrir Square began. 3

Even with Mubarak’s resignation, many of his staffers were still in their government positions a year after the initial protests and many considered “that the revolution did not end,” said Ramadan.

Although Yemenis fight for Saleh’s resignation took months, compared to Egypt’s 18 days, on Nov. 23, 2011 President Saleh signed an agreement, while in Saudi Arabia, that ended his 33 years in power, as reported by Al Jazeera. 4

Between the time of Mubarak’s resignation and Saleh’s resignation, dissent spread to Bahrain, Libya and Syria.  All of these countries were calling for the same thing that Egypt had achieved; the resignation of the present regimes.

According to The Guardian, the protests in Bahrain were eventually contained through a government crackdown with the help of Saudi Arabian troops; long-time Libyan dictator Moammar Gadhafi was killed on Oct. 20, 2011 after months of protests and by the end of that year, it has been estimated that over 5,000 civilians in Syria have been killed. 5

Through just a brief time in modern history, millions of people in the Middle East and North Africa have taken a stand for freedom and have done all that they can to ensure that one day they will be free.

The youth, primarily, have taken the initial step to end the harsh political oppressions that they face.  In regards to older generations,

“I guess one thing that surprised everyone is that the youth were able to do something that they (older generations) haven’t been able to do,” Elshamy said.