Video and Article By: Liz Scopelitti
Young people have played large roles in the recent Arab Spring revolutions, which were ignited by the self-immolation of  a 26 year old Tunisian, Mohamed Bouzazi in January of 2011.

Social media outlets quickly picked up on what Bouazizi had done, which resulted in the movements that have happened throughout the Middle East.  The young people went head-first into the movement, but there has been a lack of support from the older generations.

“If you look at a lot of revolutions over time, there are often a number of young people who get involved because of their enthusiasm,” Andy Carvin, National Public Radio strategist, said.

Differing opinions between generations  and lack of technical knowledge among elders has made progress a difficult concept to retain, in regards to more things happening.

But with improvements in technology and the number of adolescents having access to these sources, it makes the youth’s involvement in the revolutions much more practical.

“For these particular countries, not only are young people online, young people are the dominant part of the demographics there,” Carvin said.

Because social media has become a newer trend of the 21st century, older generations tend to be unfamiliar with what it is.  It has even gone so far as to challenge the government and past rulers.  One particular demonstration against the resignation of Hosni Mubarak, the former president of Egypt, was formed by groups of young people looking to remove violent dictators from having control over their country. 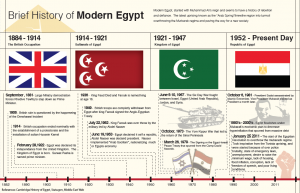 Info graphic about the brief history of modern Egypt. (designed by Chris Sarvadi)

“Social media has played a very important role and it has challenged the authority of those who ruled,” Pandeli Glavanis, Ph.D., Professor at the American University in Cairo, said. “No matter what they say, videos or several videos are on the Internet, proving the exact opposite.”

The support of all individuals young or old is needed in order to see a permanent turn-around in the way the government operates.  Continued progress will be possible if every generation, both young and old, can come together and stand united in the fight for change.