Video and Article By: Danielle Alio
Harassment and injustice continue to blockade women’s progress.  Egyptian women have objected their long-standing oppression in the Arab world and feel it’s time to state what it is they hope for a new Egypt. The challenge has not been easy and progress is still in its beginning stages.

“If you want to make sense of a democratic culture anywhere in any of the countries in the Middle East, the first thing you’re going to have to look at is how that society treats its women,” Pand
Glavanis believes that women play a vital role in creating a new Egypt. Many young people who have protested during the Arab Spring and particularly in Egypt have pushed democracy as a tangible government that could help solve many of the injustices Egyptians face.Pandeli Glavanis, Ph.D., graduate professor at American University of Cairo, said. “It’s very indicative.”

Sarah Tonsy, 27-year-old graduate student of Glavanis’ explains that the current treatment of women in Egypt comprises inequality and harassment of many kinds.

“Almost everyone gets harassed,” Tonsy said. “It’s some sort of female degradation because of the level of literacy among Egyptians. I think that plays a huge role.”

“Poor families, they prefer to give education to boys especially in the rural areas,” Ruta said. “They prefer girls to stay at home and they become mothers. The main goal in Egypt is just to become mothers and have a million kids.”

According to research shown by the United States Agency of International Development, Egypt’s median age of pregnancy is 22.1 and the teen pregnancy rate is 47 per 1,000 people. Those under-served families, Ruta believes, are the ones who need the change in Egypt the most. However they are not being well represented.

“These movements never really interacted with the targeted women at the grass roots level,” Ruta said. “They [upper class women] have other priorities. We need to distinguish between the categories of women.”

Glavanis also believes the women’s voice in the Arab Spring is corrupted. For e 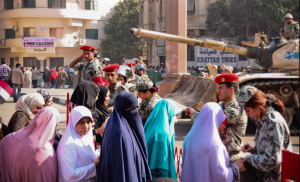 xample, Glavanis says many women leaders in the protests are too concerned with forming Non Governmental Organizations instead of paying closer attention to politics.

“Rather than engaging in politics, women have decided to squabble among themselves in the feminist movements post 25 January in terms of which one is going to be the leader of which NGO,” Glavanis said.

Glavanis explains that it’s the middle and lower social classes that are left to struggle in the streets.

He recalls a 12-year-old girl who he encountered in Tahrir Square during one of the violent movements. She was collecting stones and handing them off to young men who would attack the military.

“Young girls, women of all ages and political and religious persuasion were active at the very start of the revolution.  The so-called women political leaders are not representing the majority of what Egyptian women feel,” Glavanis said.”

While the youth in the Arab Spring have been at the forefront of activism, old stereotypes and stigmas have proven hard to rid in an effort to become a unified frontier.

“Appearance plays a huge role in Egypt. The people here take the wearing the veil as being lower class kind of stereotype. So if you’re veiled you’re definitely middle or lower class. They wouldn’t really think you’re a university student. They would look at you differently,” Tonsy said.

“Think of a society for women were there’s just nothing. It’s just completely a glass ceiling, very low right above their heads and no opportunity,” Glavanis said.

With a year passing since the beginning of the Arab Spring and the fall of Egyptian ruler Hosni Mubarak, many injustices and inequalities have been uncovered for the world to witness.

Glavanis recognizes that there is much to be done to equate Egyptian women’s opportunities with that of a western woman. He is aware however of the substantial progress young people, women in particular, have made.

“I think it’s going to take a very long time, a generation or two to feel confident that they can do something with their futures,” Glavanis said.

“Young women were prepared to leave home go to the square sleep in a tent next to men at night away from their parents in a traditional Islamic society. That shows you the courage that these girls actually had. That by itself would never have been thought of, prior to the revolution.”