Video and Text By: Chris Sarvadi
In the Middle East there are four main types of governments: Autocracy, Monarchy, Democracy and Military Dictatorships.

Autocracy is a form of Government where a single person holds all political power.  There is no representation of the people in this type of system.  This is the same idea as an oligarchy (rule by a minority, by a small group). 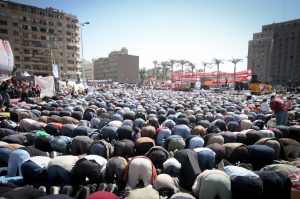 Autocracy is not the same as totalitarianism, as this concept was created to separate modern governments that appeared in the 1930s from traditional dictatorships.

It also isn’t identical to a military dictatorship, as these often take the form of “collective presidencies.”  Syria is a perfect example of a country that has a president, but does not represent the people nor has power withheld from the position.

However, an autocracy may be a military dictatorship or a totalitarian system of government.

Similar systems would be an absolute monarchy.  Monarchy is a form of government where control is essentially represented in a single individual.  A monarch historically ruled autocratically but over time power was given to constitutions, giving the people the power to make decisions for themselves through elected bodies of government.  In current usage, the word monarchy generally refers to a traditional system of hereditary rule, as elective monarchies are rare in the modern period.

There are two different types of monarchies: hereditary and elected.  In a hereditary monarchy, the position of power is inherited or passed through bloodline and/or order of succession.  An elected monarchy will choose its ruler usually by an electoral college whom only a few people may vote.  Most monarchies are of the hereditary form and few elected monarchies still exist.

Another form of government that is present in the Middle East is a military dictatorship, where control is in the hands of the military leaders.  Most military dictatorships are created after a coup d’état has ousted the previous government.   They can also be created by leaders who become the face of the country such as Muammar al-Gaddafi in Libya and the late Kim Jong Ill in North Korea.

There are a few examples of democracies in the Middle East including Lebanon and Israel.

7 Responses to “Social Injustice Trumps It All”