Video and Article By:  Jamie Santoro

As the Arab Spring movements spread across North Africa and the Middle East, people around the world tried to identify motivating factors that pushed people to protest.

Many in academia pointed to the economy. Others pointed to the high unemployment levels. Both of these factors are part of it; however, a huge motivation is education.

A study by the World Bank in 2008, as reported by Times Higher Education, said “the region (North Africa and the Middle East) has among the largest 0 to 14 and 15 to 24-year-old cohorts in the world.”

“This youth bulge will substantially affect demand for education. Presently, the bulk of this cohort is at the age of secondary and higher education, the least developed components of education systems in most of these countries.” 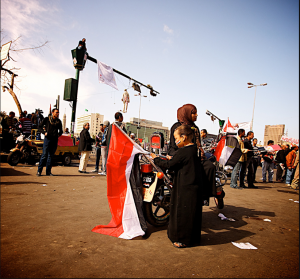 Hassan Diab, Lebanese Education Minister, was quoted in University World News, summing up the problem as “quantity vs. quality.” He continued, “In 1998, there were three million students in the region. Today there are 7.6 million. And 65% of the population is under age 25. Of the 50,000-odd schools in the region, perhaps 1% are good.”

The world saw the effects of this first hand during revolts during the end of 2010 and early 2011 when the push for change reached critical mass.

There is also a disconnect between the educational system and the job market. Schools are not giving students the skills that the need to get the jobs that are available in a struggling market. The Guardian reported that in 2006, 80% of Egypt’s unemployed were under 30, 82% had never had a job before but 95% of the unemployed in Egypt have completed secondary school.

An entire section of the population in the Middle East and North Africa are in a university or planning on going to a university and realizing there may be no future for them after school. 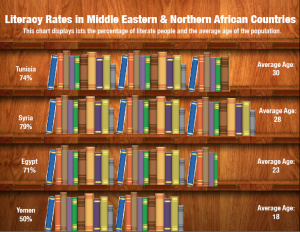 In a post-Arab Spring world, the youth have spoken. They achieved a lot but the road to fixing the education system is long. The landscape is changing and there aren’t many ways for young people to stay up to date.

“There are different political parties, coalitions and foundations formed to educate people politically,” Sarah Tonsy, a political science major at the American University of Cairo, said.

“Especially nowadays with the parliamentary elections coming up and with anticipated problems regarding supervising the elections, groups and parties are organizing workshops, posting documents on their pages.”

Tonsy continued to speak about how she stays informed saying, “I try to read a lot and I definitely follow the news quite frequently. I also follow a lot of political activists on Twitter, lots of my friends who are in Tahrir square. I basically keep myself really up to date with the current situation.”

Young people like Tonsy have taken to social media networks and international sources to get their news and create their own web of education.

Overall, the youth population is still waiting to see change. Mosa’ab Elshamy, an Egyptian student who was active in the movement summed it up saying, “The youth haven’t found their voice or maybe they haven’t taken authority yet or maybe the next Parliament isn’t going to fully represent them, but they still have the same sense of satisfaction that they have done something that will take longer at times and over the years will hopefully do something for the good of the country.”

One Response to “Education: Motivation for a Revolution”