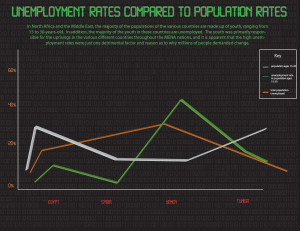 Throughout the world, citizens are frustrated by economies in desperate need of restructuring. Poverty, unemployment and a lack of economic opportunity are all contributing factors to the revolutions.

“I would say that we have come to a point of no choice. The [United States] is running out of money. So the 1%, the billionaires, their money is going to start to devalue very soon. It’s already starting to be devalued. So they’re really going to have no choice but to start listening to the demands of the 99%,” Jean Neumerowski, an Occupy D.C. protester, said.

This concept is the backbone of the Occupy Movement that many say was inspired by the Arab Spring, and given the nickname the “American Spring.”  Protesters in the United States mirrored Arab Spring tactics and evoked the same message as those in the Middle East.

“The spirit of revolution and seeing that a section of the world is in turmoil, I think it kind of made us think about how things are operating here,” Pat Farnach, a U.S. Government employee, said.

While the circumstances of the Arab Spring differed from that of the Occupy Movement in the United States, two themes that remained true in both cases were a poor economy and lack of job opportunities. Ragia Mostafa,  an editor of The Caravan online newspaper at the American University in Cairo explained that labor strikes sparked many of the protests throughout Egypt.

Mostafa explained that in some cases, a family of five would only be bringing in about $100 per week.

“The economy of Egypt is so bad. It has become worse and worse. There is no work. There is no safety. If we ask for business dealing with any other country, the business man refuses because there is no government, no real staple of politics and this is effecting Egypt and this increases the people who are unemployed in Egypt,”Abdullah Alfakharany, resident in Cairo and coordinator for foreign affairs at the R.N.N., said.  According to a recent article by Robin Wright, one hundred million people, or one third of the Arab world, are in the “job-hungry” age range of 15-29. This causes many Egyptians to feel a sense of relief after the fall of Mubarak, but it is not an immediate solution to the unemployment crisis.

Additionally, an article from CNBC, posted Jan. 25, 2011, projected Egypt’s economy to have grown by an annualized 6 to 6.2 percent in October to December 2011.  However, in 2012  nearly one-third of the Egyptian population is living below the poverty line.

Unemployment and poverty are some of the root causes of uprisings throughout the world, especially in Egypt. Although citizens are striving for change, there is still a long road ahead until job security is achieved.

“The economy is in bad shape. I don’t know if employment was extremely high before the revolution but it was one of the frustrations that built up and led to the uprising,” Max Strasser, a news editor of an Egyptian independent newspaper, said. “I don’t know much has gotten worse, but I don’t think it’s gotten better in the last year, that’s for sure. The economy doesn’t  look like it has changed over the past year and I don’t think it’s going to change any time soon.”