Video and Article By: Danielle McLaughlin
Government corruption and strict ruling regimes have lead young  Egyptians to speak out against the long standing oppression.
“It’s heartbreaking.  There’s a lot of corruption and police brutality in Egypt,” Ragia Mostafa, Editor for American University in Cairo’s online newspaper, Caravan, said.  The Egyptian Government has been corrupt for as long as most Egyptian citizens can remember.  Mostafa had witnessed the corruption first hand when a police officer stopped her and her boyfriend who were sitting in a car parked outside of Mostafa’s home. The officer knocked on the window and demanded that Mostafa give him $300 or the officer would report that Mostafa and her boyfriend were engaging in sexual activity in public.
“I was chilling with my boyfriend under my house and we were just chilling in the car eating cereal and I was smoking a cigarette and I was like I’m going to chill in the car until I’m done my cigarette  because I didn’t want to smoke in my house… and this informant comes up to the car and knocks on my window and is like, ‘I’m going to take you to the police station,’” Mostafa said.This is why Mostafa has taken to demonstrating and voicing her opinion in the streets.

“Youth usually  take part on the street and voice their opposition there because usually in times of dictatorship it’s hard to be involved in politics without, as they say, getting your hands dirty,”

Mosa’ab Elshamy, a protest Photographerfrom Cairo, said.According to Globalintegrity.org, there were many factors that contributed to the revolution.
This data suggest that a lack of government transparency and accountability helped to exacerbate many of the country’s long-standing governance deficiencies.  These deficiencies lead to a string of demonstrations. 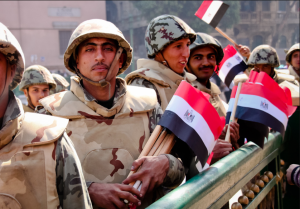 These protests gained the name, The Arab Spring, but have also been referred to as The Arab Awakening or The Arab Uprising. The Arab Spring officially began on December 18, 2010.

The first protests which sparked The Arab Spring began in Tunisia as a direct response to the Tunisian street vendor, Mohamed Bouazizi, who set himself on fire to protest police corruption and mistreatment  in Tunisia.

Soon after this occurred, protests were sparked in neighboring countries, Algeria, Egypt, Yemen and Jordan.  As a result of these protests, within a year four governments had been overthrown and the protest trend has grown throughout the Middle East.

“Some bad things get unleashed in revolution and one thing that seems to be going through Arab societies is sectarian violence,” Mark Schnellbaecher, Catholic Relief Services Middle East Region Director, said.

It’s not just the youth that are being affected by the corruption.  Women are also among those who are mistreated and have to obey laws that seem unfair.  Most women in Egypt aren’t given the same rights as men.  Many women feel strongly about this issue and are a part of the protests and demonstrations.

In order for these protests and demonstrations to be successful, many young people began to turn to social media as a way of organizing these rallies and also as a way to communicate to their audience and let their cause be known.  They also used social media as a way to voice their desire for complete freedom of speech. A Facebook page was created to keep protesters updated on the current situation.

According to an article released by CNN, “The Facebook group demands raising the minimum wage, sacking the interior minister, creating two-term presidential term limits and scrapping existing emergency laws that the group says “resulted in police control” over the people and the nation.”

“Freedom of speech has really changed since the revolution. A lot of people are being very bold in their speech, more so than before. Yet a lot of cases of censorship, self-censorship and state TV is still absolute bullshit. It’s basically the mouthpiece of the Supreme Council of Armed Forces. So it’s a yes and no. (It has) changed a little bit, but not nearly enough,” Mostafa, said.