Video and Article By: Justin Sillner

What are the youth’s hopes for the future?

The citizens in Egypt have protested for a variety of legal and political issues, including stopping police brutality, revoking national state of emergency laws, guaranteeing freedom of speech and addressing economic issues.

According to Al Masry Al Youm, Egypt’s top Arabic-language newspaper, after a series of demonstrations, marches, acts of civil disobedience and labor strikes, Egyptians were able to overthrow the regime of Egyptian President Hosni Mubarak leaving a total of 846 people dead and 6,000 people injured.

Max Strasser, journalist and news editor at the English version of Al Masry Al Youm, Egypt Independent,  explains why he feels the youth started to revolt back in January 2011.

“There is a mix of people between the poor and the upper middle class.  Egypt is a very young country, 60 percent of the population is under the age of 35.  Because of that, everywhere you go is going to be dominated by young people.  Young people have definitely been a main part of the protests,” Strasser said.

“Young people have been crucial in leading action.  I think that the young people feel that they have been let down by the old regime.  They feel like they have been made promises of economic opportunity or human dignity of social justice and that’s why they began the revolution,” Strasser said.

We look forward to a country that is free of police brutality where the police actually feels that he is here to serve you, not for you to be afraid when you see a man in uniform.

But despite efforts made by many young Egyptians, little change had been made a year later and people were left wondering if this change will come any time soon.

Abdullah Alfakharany, a citizen in Cairo, shares this desire for political change with many other Egyptian youth.

“I don’t care about politics in the next year but I’d like to see Egypt meeting other countries again, to get back to it’s power that we grew up missing, to the power that we saw in the 1950s and finding that our money belongs to Egyptian people and not just five percent of the Egyptian people,” Alfakharany said.

“I would like first of all an Egypt free of military rule. We have been ruled by the military and the different military figures and it has shown that it never brings Egypt forward and it has no positive impact on Egypt.  I want a full transition to a democratic and civilian state that guarantees rights for every Egyptian, for the minorities and different genders,” Mosa’ab Elshamy, Cairo citizen said.

According to Reuters, Egyptians must overcome economic and political differences to unite and put the country on the path to democracy and away from military rule.

“They want to see a government that reflects their Islamic values.  Some of them say they want religious law, some say they want a civil state where religious law is a part of how laws are made.  Of course there are a lot of young people who are supportive of the Muslim Brotherhood but on the other hand you have the revolutionaries that say they don’t want military rule,” Strasser said.

According to CNN, the Muslim Brotherhood is a religious and political group founded on the belief that Islam is not simply a religion, but a way of life.  It advocates a move away from secularism, and a return to the rules of the Quran as a basis for healthy families, communities, and states. 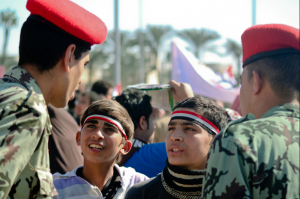 According to the Al Masry Al Youm, many political powers, including the Muslim Brotherhood, object to giving the military wide powers and autonomy from civilian oversight.

“I don’t think people are thinking too much if they want a parliamentary democracy or a presidential democracy.  They want to a revolutionary transitional government which revolutionary councils overseeing the transition over the military,” Strasser said.

“I would say transitioning to a civilian government, it is not a step as much as it is a huge rock to be shifted.  There is the dilemma of the Islamic political parties like the Freedom and Justice party of the Muslim Brotherhood and the El Nur party of the more dogmatic Salafis,” Sarah Tonsy, a graduate student from American University in Cairo, said.

According to Foreign Affairs, the leading forum for serious discussion of American foreign policy and global affairs, Egyptians want their country to be the center of the Arab world.  They know that when the new political order in the Middle East consolidates, they may be forced to contend with lots of centers of power.  The more of these that they are on good terms with, the closer they will be to achieving their goal.

“A civilian government of any type is the main and current goal towards faith in carrying on with the demands of the revolution,” Tonsy said. 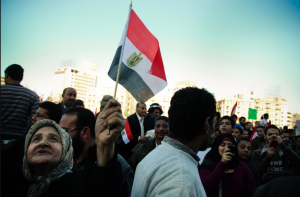 “We are looking for an Egypt which could finally be free of poverty and get rid of the 40 percent of people under the poverty line,” Elshamy said.

According to France24, about 40 percent of Egypt’s 80 million people live on or below the $2 per-day poverty line set by the World Bank.

“The young people they just want it to change right away. They want it now, and they want just everything to change. They need the right leaders to help them change and want change. In order to build any type of trust for those people and they need a leader who they can build trust with,” Lisa Gibson, Founder and Executive Director of the Peace and Prosperity Alliance, said.

“I mean there is so much to look forward for.  We look forward to a country that is free of police brutality where the police actually feels that he is here to serve you, not for you to be afraid when you see a man in uniform. It is important to look at the priorities in Egypt now.  And the priorities are security, education and economy,” Elshamy said.