After President Hosni Mubarak was ousted in Egypt, elections were held for the country’s new government.  The legislative structure would be  a bicameral parliament with an upper and lower house, but elections were met with violence from the Egyptian military.

“The military is attacking people who demonstrate against their rule because the military is trying to keep the elected government powerless,” said Troy Carter, alumnus of the American University in Cairo and student journalist.

The People’s Assembly plays a major role in drafting legislation and other legislative duties.  It has a total of 508 seats.  The Military Council appoints ten seats, while the people elect the other 498 seats.  Two-thirds of the seats are elected from the parties or coalition lists. The remaining seats are available for candidates running as individuals.

The People’s Assembly and Shura Council were scheduled to be elected in three different stages over a span of three months in late 2011 and early 2012, but violence plagued the process. 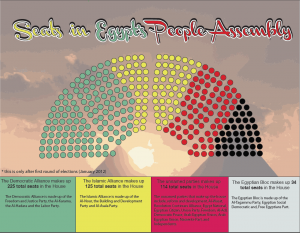 Infographic above explains the outcome of the first round of elections for the People's Assembly. (designed by Felicia Melvin)

The violence did not keep voters from the polling stations, as many stayed open extra hours to accommodate the high number of voters.  Party members stood outside handing out flyers and pressuring voters to vote for their party or candidate. According to Carter, many stations also lacked privacy, which may have added unnecessary pressure to a voter’s decision.

“Sometimes there was not privacy in the voting itself, no curtain, nothing. Priests in churches told people who to vote for in each district,” Carter said.

People who were boycotting the elections took to the streets as well claiming that the voting was rigged and illegitimate.  Many turned to violence as they clashed with the military in Tahrir Square.

The official results of the elections for the People’s Assembly favored the Islamists according to The Guardian News and Media Limited.  The Muslim Brotherhood, a party banned under the regime of Mubarak, won 38 percent of the parliamentary seats according to the High Elections Committee.  Saad al-Katatni, a leading Brotherhood official was named the speaker of the assembly.  The Islamist Al-Nour acquired the second most seats in parliament with 29 percent, followed by the Egyptian Bloc coalition and the New Wafd party.

This was the first time in Egypt’s history where the people had the ultimate power in choosing its government officials free from the rule of an autocrat.

“The voting process is not that of a country that has been voting for years.  This is the first year that people practiced politics,” said Abdullah Alfakharany, the Coordinator of Foreign Affairs at the R.N.N. “The people chose how they would direct the democracy.”