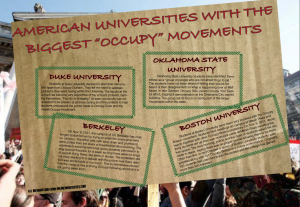 Infographic above explains the biggest Occupy Movements on American college campuses. Movements around the world were sparked by early successes of Arab Spring revolutions.

An object at rest, stays at rest, and an object in motion stays in motion unless acted upon by an unbalanced force

As  regimes were over thown by Arab Spring revolutions, young adults around the world began gathering to voice demands for change.

During fall 2011, protesters in the United States formed their own push against economic, political and social structures.  They began establishing tent cities called Occupy movements.

Major American cities (Boston, New York, Philadelphia, Washington, Oakland…etc) became long-term home to Occupy movements.  Citizens in each city began mirroring the organization of Tahrir Square in Cairo –  sleeping in the streets to push for systems that work for everyone.