Video and Article By: Chris Sarvadi

After nearly a year of unrest in Egypt, rounds of elections were held to elect parliament members.

In the first round of elections, the two Islamic parties – The Freedom and Justice Party and the al-Nour Party – received the most votes.  Salafist thinkers such as Muhammad Rashea Rida, who believed in the modern Islamic state, heavily influenced the Muslim Brotherhood.  Although these groups have much in common, their differences do not come through their political beliefs, but through their timing, tactics and use of the political system.

“The Muslim Brotherhood are extremely sophisticated organized politicized and are very business-like.”  Pandeli Glavanis, Ph.D., Professor at The American University in Cairo, said.

Hassan Al-Banna founded the Brotherhood in 1928 on the teaching of Salafist beliefs.   Both parties are fundamental Islamic parties that believe Sufism corrupted the core beliefs of Islam.  Salafist extremists also believed that Islamic Clergy weakened the integrity of Islamic law, also know as Sharia Law.  Salafist’s, as well as many other ultra-conservative Muslim groups, see it necessary to implement Sharia Law to return Islam to its original state.

“Torture is used [under Sharia Law] as a form of punishment, as well as all kinds of unpleasant forms of execution.  For non-Muslims in the region it doesn’t bode well,” David Patterson, Professor history and literature at University of Texas Dallas, said.

Rida, who saw the need for the reformation of the Ottoman Empire under a restored Caliphate, set the tone for the modern day Islam.

Although being illegal in Egypt until recently, the Brotherhood formed an underground community offering many social services gaining the trust of the people.

“When they saw the trouble brewing, they saw it as an opportunity.

They were with the opposition to the government because it was a huge opportunity for them, as big doors were opening. “ Said Patterson.

The Muslim Brotherhood wants to transform Egypt into a fundamental Islamic state that follows Sharia Law.  The Brotherhood, who had a history of violence, is now more careful with its tactics.  The leadership has confirmed its strategy of “da’wa” – a long-term propaganda campaign to build its base of support.

In contrast, many off shoot régimes have no patience for the Brotherhood and calls for revolution immediately.  Salafi groups started showing up in the 1970’s and played a key role in the assassination of President Anwar al-Sadat.  They have been very active in the past in terrorist activates but today are not militant. 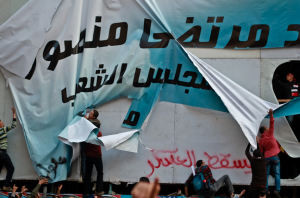 “The Muslim Brotherhood is the soil from which the jihadist movement came,” Patterson said. “The regimes that they are rebelling against in North Africa and Syria are also repressive régimes. They are not good guys but frankly I don’t see very many good guys emerging from the Arab Spring.”

The Future of Egypt now lies in the hands of the majority in Parliament who happen to be both Salafist and the Muslim Brotherhood.  The Brotherhood can and will govern without the Salafists and continue their push for an Islamic Egypt.

“The younger generation will be suppressed as the brotherhood gains more and more power I am afraid.”