Video and Article By: Danielle Alio
Egyptian women have demonstrated through their pivotal role in the Arab Spring that they are ready to have an equal voice in the dawn of the new Middle East.

“If you look in the constitution it’s all about equality and equality is in front of the law no matter what your gender is,” Noha Sadd, a graduate student at the American University in Cairo commenting on equality laws in the Egyptian constitution, said. “But it’s not applied.”

The research also states that in Muslim patriarchal societies, sex-segregation and veiling are often practiced. Some Arab nations such as Egypt prior to the revolution had civil laws in their constitutions that granted women certain rights.

“I don’t think there’s any gender equality in Egypt and I don’t think it’s coming any time soon but we’re sort of working on it.  We have a long way to go in terms of that,”

Mostafa participated in the Women’s March in Tahrir Square in December 2011.  The notorious battleground acted as a war zone for protesters and military forces in Egypt since the beginning of the revolution in January 2011.

“I was there. It was totally the most awe-inspiring thing in Egypt,” Mostafa said.  “[The protest] wasn’t asking for women’s rights; it was women asking for basic respect.  Just like, don’t strip us naked on the streets.”

The Women’s March was documented and streamed on the Internet, revealing the severe brutality of military force against young women.  According to CNN journalist Isobel Coleman this march was the largest women’s movement since 1919. 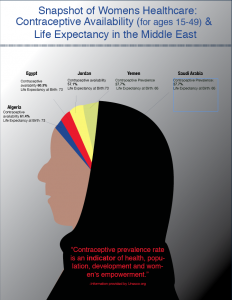 The infographic above is a snapshot into womens healthcare availability. (designed by Liz Scopelliti)

caught on video and circulated on Facebook and YouTube.” Mostafa said.  “One of the officers stepped on her breast with his boots.”

The young woman Mostafa mentioned has not come forward to press any charges.  She is known as the “blue bra girl.”

“It caused an outrage within the Egyptian community like how can they strip a girl in front of everybody there.  A really bad image to see so a lot of females were outraged,” Mostafa said.

Coleman adds that “women have played an important role in Egypt’s modern revolution but have struggled to translate their activism into a political role in the new, emerging system.  They have been excluded from important decision-making bodies.”

Mostafa suggests that women’s struggles begin in the home.

“The man is going to work, the man is going to go get educated,” Mostafa said.  “If you look at a household that is poor and both children are sick they’ll take the boy to the hospital and just give the girl the same medicine the boy is prescribed.  If a family is rich, the mother would prepare breakfast for her son but her daughter would figure it out on her own.”

Sadd explains the women in Egypt, particularly the women activists, are not united.

“The women protesters are elitists.  They don’t ask the poorer women ‘what do you want’ or ‘what are your dreams.’  They just talk about their concerns as elite women,” Sadd said.

According to Sadd, the women who are the face of the revolution are not a representation of her message.

“Most of them are over 70.  They convey this to the public as the women’s movement in Egypt but they do not represent us at all,” Sadd said.

Sadd and women like her have created a young women’s movement.

“Its a pro-democracy movement.  We try to tackle things like freedom and democracy.  All of these young women’s movements are to achieve better life for women,” Sadd said.  “Not all old women but younger women, poor women.  Not only rich women as it used to be.”

Both Mostafa and Sadd have been present in recent protests and while they both agree it’s an empowering experience, not much has been accomplished as a result of the revolutions.

“During the revolution I felt so empowered.  There was no sexual harassment, it was very low.  I thought I could say anything, do anything,” Sadd said. “But now its very worrying—the situation.”

Sadd explains that the most recent elections elected the ex-corrupt ruling party and the Muslim Brotherhood as the newest members of Parliament.

“All of the women, all of the young people in the revolutions, they’re gone.  That’s scared me a little bit.”